Practical tips for self-driving in Africa

They include all sort of practical information, focusing on southern Africa: South Africa, Namibia, Botswana, Swaziland and Lesotho. These countries are the best destinations for self-driving. However, these tips are also applicable for other African countries, though speed limits and other rules change slightly from country to country.

Though you’ll likely be the slowest vehicle around if you keep to the speed limits, speeding is controlled regularly and unannounced with cameras or laser guns by Traffic Officers in hiding and fines are relatively steep. Underneath are general guidelines for the speed limits in Southern Africa, but always adhere to the signposted speeds.

You won’t find many parking meters in Southern Africa, but (especially in South Africa) you’ll find plenty of parking attendants, usually in bright day-glow vests. Most are official, though you’ll also find unofficial ones coming up to you and asking if they can ‘look after your car’. This is actually a good thing: people make money guarding your vehicle instead of breaking into it or turning to petty crime. The standard rate is 5 Rand,5 Namibian Dollars or 5 Botswana Pula, depending on how long you parked. Never expect change so have small money handy for this.

In cities you’ll also find parking lots where you pay at the gates. Almost tourist attractions, hotels, lodges and guesthouses have their own secure parking area, usually free of charge.

Where to find petrol must be one of the top practical tips for self-driving in Africa. Filling stations are found in most towns and larger villages and at regular intervals along the major highways. Some tips:

Most major roads are tar roads, but many game parks and sights can only be reached by untarred roads. Some of these are very sandy or muddy, but most are gravel roads. The actual driving on gravel roads differs very much from tar roads.

Robots, sleeping policemen and such

Some things are very different in Africa and it really helps to read the following practical tips for self-driving in Africa. For instance, you’ll generally find many more roadblocks than in Western Countries. Always come to a full stop just before the stop sign and stay polite and you’ll be fine. Some things are a bit quirkier though. Here are some examples.

One of the most practical tips for self-driving in Africa is often overlooked: animals on the road. No matter what road you’re driving on, be on the lookout for animals crossing the roads – usually domesticated. Cows and goats graze in the countryside often in the roadsides and are not always tied up, and chickens are everywhere. So slow down when you see animals in the road-side or when nearing a village!

Safety and car theft, especially in South Africa, have made headlines around the world. Though the situation is in reality much better than described, it IS wise to take precautions and do what most Africans do. So, when driving anywhere in Southern Africa, use common sense and try to apply the following practical tips for self-driving in Africa:

Like this? Read our e-book ‘The freedom to drive yourself’

Read all our free e-books 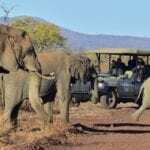 What you need to know before choosing a safari

A comprehensive guide written by our safari experts to choosing your sustainable safari. END_OF_DOCUMENT_TOKEN_TO_BE_REPLACED
Read e-book 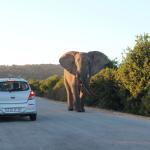 Practical tips for self-driving in Africa 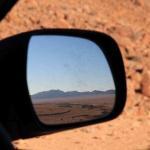 The freedom to drive yourself